What happens when the 12th century’s most famous lovers are caught in the crossfire of factions, religious reform and blind ambition?

Heloise is a determined young woman with an exceptional mind, longing to pursue learning rather than marriage or life as a cloistered nun. Her path inevitably crosses with Peter Abelard, the celebrity philosopher, theologian and master at Paris’ famed Cathedral School.

When two such brilliant minds meet and engage, sparks are likely to ignite. But theirs is an impossible love. This is a time when the Gregorian Reforms are starting to bite and celibacy among the clergy and church officials is being rigorously imposed.

Based on meticulous up-to-date research and the pair’s own writings, this novel offers a plausible interpretation of the known facts and a vivid imagining of the gaps in this legendary story. It shines a light on a changing world whose attitudes and politics are not so very different from our own.

And for answers to frequently asked questions you can look here

And here’s a wonderful review from The Listener 3.6.16 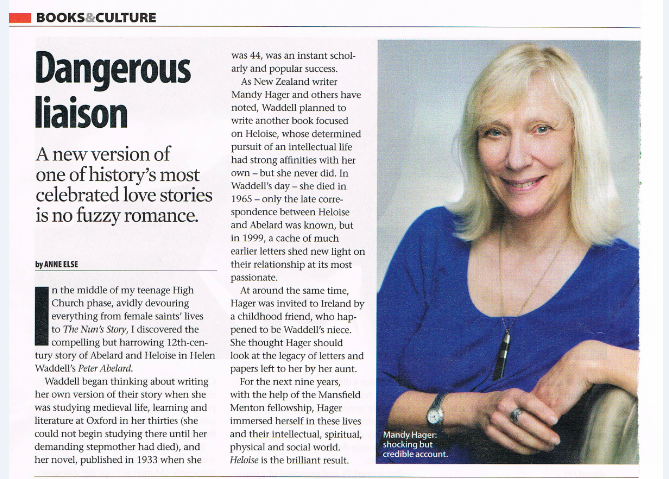 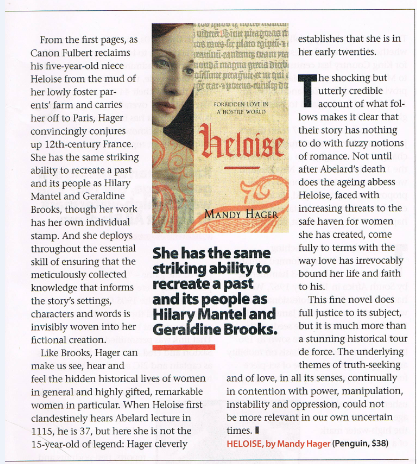 And from a fabulous review by Claire Mabey in Metro magazine (thank you Claire!):

…Mandy Hager has written the life story of Heloise as a novel and it is a tremendous achievement. Traumatic, hopeless, tender and hopeful in the telling, the story weaves its way through the shifting politics of state and church in medieval society

… Her encounter with Abelard is near-immediate, intense, and at times shocking. The pair spar and fire each other’s wits with one-on-one lessons and letter-writing exercises and Hager’s meticulous research and deft layering of circumstance underscore the story with a constant hum or threat and intrigue.

… In Heloise, Mandy Hager has delivered to us much more than the re-imagining of a famous love story. Flick to the back of the book and you will find appendices, with a list of historical figures and places, a list of main sources, a list of books from which the author was given permission to quote extracts, and endnotes.

Heloise is a body of work by a brilliant writer who has picked through, dug out, put back together and carefully brushed off the intellectual and historical intricacies of this famous medieval relationship.

The achievement is a treasure. The reader is given access to a 12th century world in which the central characters have been so carefully brought to life.

This is the romance I’ve wanted to read since seeing the concrete forms of Abelard and Heloise in a graveyards in Paris and it’s a history I’ve wanted to be immersed in since discovering that Heloise, in her own right, is a woman to inspire every one of us today.

You can also listen to an interview on Radio New Zealand’s Standing Room Only (4.6.17)

And here’s a nice review on National Radio’s Nine to Noon: 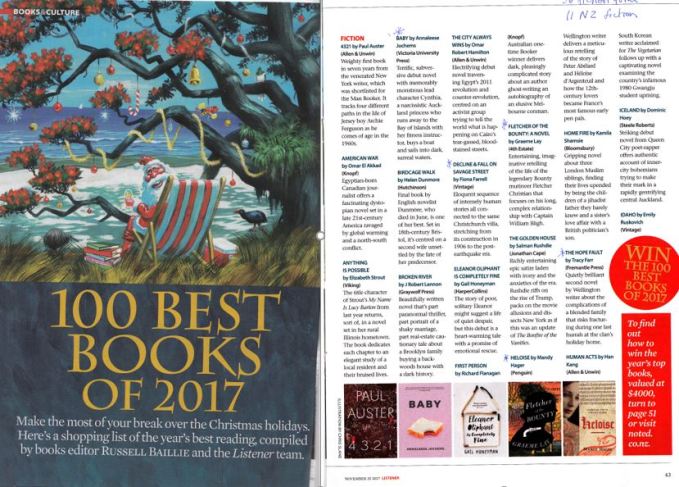 16.11.18   I recently received this very thoughtful review from a reader. Thanks so much Diane McCarthy.

Mandy Hager spoke last February in Christchurch to a packed NZSA audience at CWEA about her challenging project. We heard how her “sister” Louise Anson had given her access to historical manuscripts, collected by her late her aunt, writer and academic Helen Waddell. We heard how she cried for five weeks when her first version of the novel was rejected by her publisher on the grounds of its readability.
At Unity Books, I spied a pile of her novel on the floor. Heloise was selling well. We talked about her book launch, where the same story had been shared. As a retired person, dependent on my national super, I could not afford to buy the book that day. But as the Unity book seller said, do take it out from the library, we need to make sure that libraries still exist.
The copy I borrowed from the Christchurch Library Service has been through many reader’s hands. It is not crisp and new, but is beginning to show wear. The back pages look like they have been read in the bath, or placed on a wet surface. The paper stock is not very robust, a feature also encountered when reading Peter Frank’s history of the New Zealand Labour Party, which publishers need to consider. But what it says is that readers are engaging with Heloise.
Why would any feminist in the 21st century even consider that a nun living in the middle ages could possibly have anything useful to say to us? I first learned a version of Abelard and Heloise’s story when a friend of mine who was a printer called his business Abelard Press.
As a Presbyterian raised Protestant, totally ignorant of my Northern Irish roots, I was appalled by the seduction of a student by a teacher in a place of trust, and disgusted by the over the top castration punishment meted out.
Such was my innocence. The Roman Catholic Church is now struggling to maintain its faithful as centuries of deception are unpeeled. Rape, seduction, and sexual corruption have been rife, hidden, and cemented over by successive popes. It is rare for a girl to seek the vocation of a nun.
Heloise’s voice comes down through the ages to help us make sense of what it is to be a woman even now. Women find themselves in all manner of spaces created by men, for the purpose of ensuring that men can wield power and privilege. We resist, question, strategize, reinvent, fail, persist, and endure.
Mandy Hager takes us into a world not dissimilar to our own. Money and power are unprincipledly coupled. Alliances within political domains seek control. War is common, political institutions in confusion, with a backlash from the right rendering transformative change difficult, and triggering extreme reactions from psychopaths. It is symbolic that Canada’s PM Justin Trudeau recently stood and spoke about bravery under fire in the rain.
In Heloise, we trace her life, from a fostered infant waif, to an esteemed Abbess of the Oratory of the Paraclete, in Champagne, south west of Paris. We see how men intervened in her life, as a discarded child of a high-born mother, to enable her to be educated by women. But not all the interventions are positive. Heloise’s relationship with Peter Abelard is fraught with risk, betrayal, mind numbing depression, and aching loneliness.
By structuring the book chronologically, Mandy Hager enables us to absorb the landscape of France in the middle ages, and understand the undercurrents and pull of power dynamics that the church exercised. This tapestry is woven carefully and underpins Heloise’s struggle to find herself and live a meaningful life. You may find yourself saying “Really?” when you imaginatively discover each event. You may find yourself becoming angry at her helplessness, and how things seem to be taken out of her hands. You may also find yourself inspired to understand what it really means to be a radical thinker and educator in an uncertain and troubled world. And yes, it is also a love story, unconventional, raw, and compelling.
But what Heloise helps us to understand is not very much different from our daily struggles as women in the 21st century against oppression. We find spaces, to tell our stories like slam poet, Daisy Lavea-Timo, and set up our own ways of performing music, like the All Girls Big Band. We find ways to celebrate Suffrage 125, across the country, regardless of whether we received a portion of the underfunding provided by this government’s Ministry for Women.
Heloise is an absorbing thought-provoking novel that rewards its reader. Mandy Hager is a writer who intelligently crafts a big story, which we can immerse ourselves in, think about and enjoy. If you love poetry, you will delight in the way that letters and lyrics are scattered through the words. If you want to have a great summer read, put Heloise at the top of your pile.